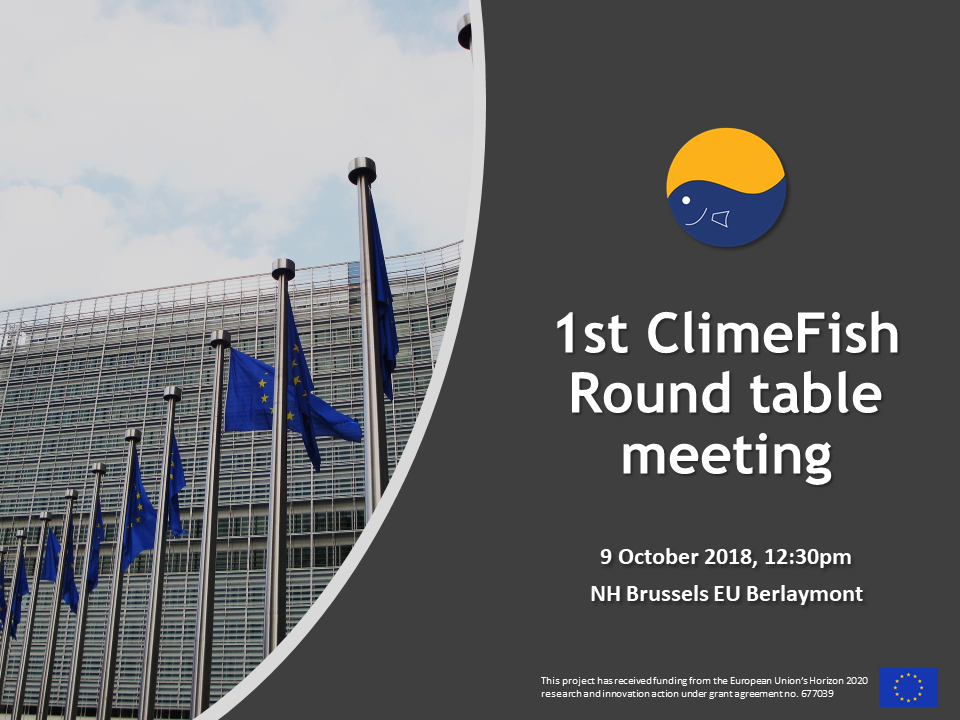 ClimeFish project facilitated a dialogue platform, where 24 participants, including policy makers and ClimeFish partners, debated on how to mainstream adaptation in the European maritime policies.

What are the adaptation priorities for fisheries and aquaculture in Europe? How can ClimeFish contribute to integrate climate change adaptation? Representatives from the EU Commission (DG Mare, DG Clima, DG Envi, DG RTD), Farnet, Euro-Mediterranean Center on Climate Change and ClimeFish partners discussed about these questions during the 1st ClimeFish round table meeting, celebrated last 9th October in Brussels.

With the aim of addressing the climate change challenges for fisheries and aquaculture in Europe, ClimeFish has organized this first round table to present the most significant outputs from its first loop and to identify how the project can contribute to the design of an Adaptation Strategy Package at European level for Fisheries and Aquaculture, including the Lake and Pond production.

“ClimeFish is contributing to the key objectives and actions of the EU Adaptation Strategy”, said Michaela Aschan, the project coordinator and leader of the European case study (C16A). “In particular regarding the key objective ‘Climate-proofing’ action at EU level by further promoting adaptation in key vulnerable sectors such as fisheries and aquaculture, we are developing general Guidelines for Climate Adaptation Plans adjusted for the 3 sectors and also Climate Adaptation Plans for 7 case studies, providing adaptive measures and policy recommendations”, added the coordinator.

During the event, the participants streamlined the essentials to integrate adaptation in EU fisheries and aquaculture, reaching agreement on the ‘Key Components’ that should be part of an Adaptation Package for these sectors:

After this fruitful group discussion, the Implementation case study leaders, Nikos Papandroulakis, Gergő Gyalog and Alan Baudron, presented the main findings for Mediterranean Aquaculture, Hungarian Ponds Aquaculture and West of Scotland Marine Fisheries, respectively, in order to facilitate the group work for the identification of the adaptation priorities and specific needs for each sector.

Marine Spatial Planning, species resilience, feeding, diseases and unforeseen extreme events were some of the adaptation priorities the participants raised for the aquaculture sector.

In fisheries, the need to address allocation keys, biomass thresholds, new species, multispecies approach and consumer’s behaviour were highlighted as the adaptation priorities at EU level.

“Adaptive management can be implemented without necessarily going through a reform of the CFP”, pointed Ernesto Penas, Senior Adviser of the Common Fisheries Policy (CFP) in the DG Mare. Penas emphasized that adaptation can be taken within the existing frameworks and urged to take adaptation without delay.

With these takeaways and productive group discussions, ClimeFish will head towards its 2nd loop, where 7 case study events with stakeholders are foreseen by spring 2019.

The results of this first round table at policy level will be the starting point for the 2nd round table that will take place next year. The aim for this second meeting will be to keep contributing to facilitate decision making though presenting the new findings of the project, the adaptation priorities identified with the stakeholders, and to test the Decision Support Software developed for the implementation case studies.