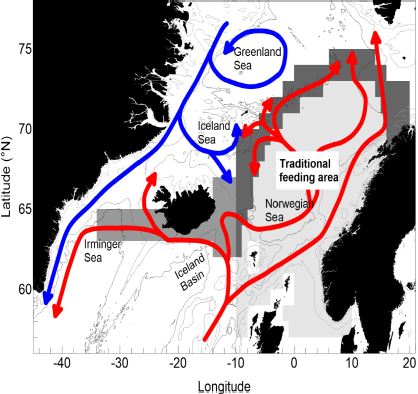 The first stakeholder meeting for the C1F case study, which covers pelagic fisheries in the North East Atlantic, was held on March 6th – 7th, at ICES headquarters in Copenhagen. This case study is one of eight marine fisheries simulation case studies in ClimeFish, meaning that the work to be conducted includes biological forecasting of the future effects of climate change, identification of risks and opportunities and the development of climate adaptation plans. The meeting was attended by 21 participants, a combination of ClimeFish scientists and stakeholders, including governmental representatives, industry representatives from both fisheries and fishmeal industry, NGOs and researchers.

The first day was dedicated to discussions on ClimeFish biological forecasting as well as the risks and opportunities posed by the predicted climate change in NE Atlantic. Dr Kjell Utne (IMR) presented preliminary results from the biological forecasting, which included predictions on increased abundance of the zooplankton species calanus finmarchicus, as well as increase in mackerel and blue whiting abundance and a minor decrease in Norwegian spring spawning herring. After good discussions on these results, Dr. Sveinn Agnarsson (Syntesa) took the floor and presented preliminary results on socio-economic assessments under future climate change and potential risks and opportunities for fisheries in NE Atlantic. Stakeholders were asked about their impression on a range of suggested impacts of climate change, which led to a dynamic discussion that will now feed into future ClimeFish work on risks and opportunities. What was particularly interesting during these discussions, was that many of the identified impacts were considered both a risk and an opportunity by the participants, demonstrating the complexity of this case study.

The second day was all about adaptive measures and how fisheries in NE Atlantic could adapt and increase resilience towards climate change. Ms Ragnhildur Fridriksdottir (Matis) gave some background presentations on fisheries governance and multilateral sharing agreements in the NE Atlantic and led discussions among participants on how these agreements could become more resilient to future changes. The discussion brought many interesting views and perspectives on this complex topic to the surface, which will be extremely useful for next steps. After a short discussion on adaptive measures and efforts each coastal state in NE Atlantic could implement within their own water to adapt to climate change, the group got a brief presentation on the CERES H2020 project, a sister project of ClimeFish, from Dr Myron Peck, the coordinator of CERES.

Overall this meeting was a success and provided invaluable input from stakeholders, which will be the foundation of future work in this complex case study. Once again, we would like to thank all the stakeholders who attended and shared their thoughts and expertise with us. The meeting was attended by 21 participants, a combination of ClimeFish scientists and stakeholders.