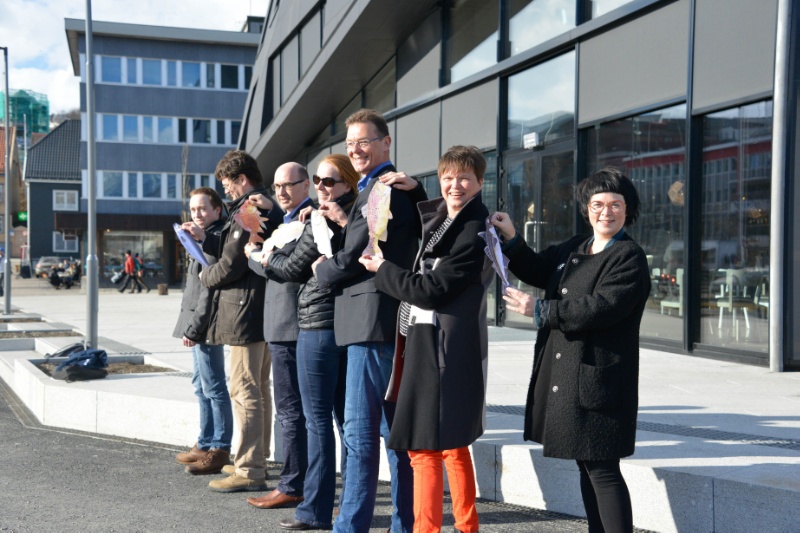 Today we will stick a paper fish to your back – but tomorrow we start investigating the impact of climate change on European fisheries and aquaculture.

“We hope to give good advice to the seafood industries so they can be prepared for the climate changes”, says Project Leader of ClimeFish, Michaela Aschan. Today, she and her fellow scientists stick paper fish on people’s backs to mark the startup of the Research project that will run for four years.

The French term “Poisson d’Avril” (’April fish’ or an ‘April Fool’) was established in the 16th Century when the king moved the start of the year from the end of March to January 1. Those who stubbornly clung to the old calendar system had jokes played on them and a fish attached to their back.

Climate change is not an April Fool’s Day prank. It is real and is happening right now.  Amongst many other concerns, climate change is threatening the sustainable growth of aquaculture and fisheries worldwide. The world population is growing, and the demand for nutritious and healthy food is increasing. Forecasts indicate an overall decline in global food production due to climate change.

Climefish is an EU research project funded under Horizon 2020, starting on 1 April 2016.  Its goal is to ensure that seafood production can increase in areas and for species where there is a potential for sustainable growth, given the expected climate developments.  It will contribute to food security, robust employment, and the sustainable development of rural and coastal communities.

ClimeFish will develop examine alternative scenarios and conduct socio-economic analysis to identify risks and opportunities for fish production in the light of climate change. Strategies to mitigate risk and capitalize on opportunities will be identified in co-creation with stakeholders. These will serve to strengthen scientific advice and to improve long term production planning and policymaking.