The Barents Sea is a marine fisheries case study of the ClimeFish project. The area considered comprises the shelf sea bordering the Arctic Ocean, Russia, Norway and the Norwegian Sea (latitude: 68-82°N, longitude: 15-60°E). The average depth is 230 m and max depths are 500 m. This area supports three main fisheries: demersal trawl fisheries targeting (i) North-East Arctic cod and (ii) haddock, and a pelagic trawl fishery for (iii) capelin. Some other species are included as well, such as saithe, redfish, Greenland halibut, and the crustaceans: deepwater prawns, king crab and snow crab. In 2014, the cod fishery alone yielded more than 600 mill. €.

During the past four decades there has been a substantial warming in the Barents Sea, with the bottom temperature raising approximately 1°C only in the last decade. Sea ice in this region is retreating and sub-zero water masses in late summer have almost disappeared. As a result, boreal (warm-water affinity) species, such as cod, have moved northward, entering areas previously dominated by Arctic fish species. Due to a favourable climate and lower fishing pressure, cod reached a record high population size in the recent years and the cod stock in the Barents Sea has not been this high since the 1950s. A poleward expansion of haddock, and a north-eastward displacement of beaked redfish have also been documented. The expansions of these fish species have led to a community-wide shift in fish composition (Fig. X); boreal communities are now found further north and the local Arctic (cold-water affinity) community has been almost pushed out of the shelf area. It is anticipated that this could result in the local extinction of some arctic fish species, such as the Polar cod.

Data analyses will be performed to assess and quantify how climate-induced changes in i) fish species distribution, ii) fish body size and iii) emergence of warm-water species and invasive species are affecting the Barents Sea ecosystem. A comparison of the fish communities between the beginning of the Ecosystem Survey taken in the Barents Sea in 2004 (a) and the survey taking in 2012 (b), indicates a significant change in distribution. The Atlantic (red) and central (yellow) communities (boreal fish species) have shifted north and east, taking over areas previously occupied by the Arctic (blue) community (arctic fish species). Open areas mean no data are available for those areas (e.g. around Bear Island in 2004). (After Fig. 1 in Fossheim et al. 2015.) 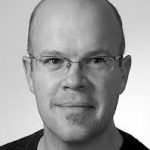